Chicago Tribune, Letter to the Editor: Mayor Lightfoot, fulfill your promise and pave the way for funding homelessness-related services

In Gregory Pratt’s article “Lightfoot still has promises to fulfill” (April 4), Mayor Lori Lightfoot’s office maintains that the pandemic and the uprisings after the killing of George Floyd have prevented her from delivering on her campaign promises.

May 4 forum will call on the city to create safe, stable housing.

Join us Tuesday, May 4 at 5:30pm to demand that our city does more to create safe, stable housing for all. The event will be hosted on Zoom and streamed live on the Bring Chicago Home Facebook page. Register here.

The city will receive $1.9 billion in discretionary funds through the American Rescue Plan. Mayor Lightfoot spent over 60% of flexible funding from the CARES Act on policing, and is now proposing that nearly half of the incoming flexible funding is spent on the city’s debt rather than on what residents need. Meanwhile, nearly 77,000 people are experiencing homelessness in Chicago. We are demanding better.

We Demand Better is hosted in partnership with Right to Recovery, Chicago Coalition for the Homeless, Communities United, Jewish Council on Urban Affairs (JCUA), ONE Northside, The Rebirth of Greater Roseland, and United Working Families.

WBEZ: Mayor Lightfoot’s Poverty Plan: What Issues, Which Groups Are At The Table?

The Daily Line: If Lightfoot is serious about ending poverty in Chicago, here’s what she’d do: coalition

Feb. 27 - A coalition of progressive groups that have been at odds with Mayor Lori Lightfoot since she took office laid out a six-point plan on Wednesday for the mayor to follow so she can meet her goal to end poverty in Chicago within a generation.

Chicago Sun-Times: Lightfoot accused of going through the motions of a war on poverty

Feb. 26 - Mayor Lori Lightfoot was accused Wednesday of going through the motions Progressive groups complain the mayor left them out of last week’s poverty summit and say she has ignored their suggested remedies.

Feb. 11 - Both Ramirez and Sen. Ram Villivalam, D-Chicago, the sponsor of the Senate bill, said they met with members of Lightfoot’s staff and called their proposal a “framework” from which to begin negotiations.

Feb. 11 - A group of Democratic lawmakers is renewing a push for Mayor Lori Lightfoot to agree to dedicate a significant portion of revenue from her real estate transfer tax plan to initiatives to combat homelessness in Chicago.

Feb. 11 - Representing a significant voting bloc, 33 Democratic state lawmakers – 20 in the Illinois House of Representatives and 13 in the Senate – introduced a bill today in a renewed effort to strike a compromise with Chicago Mayor Lori Lightfoot and advocates working to address the budget deficit while also creating major dedicated funding to address homelessness in Chicago.

Representing a significant voting bloc, 33 Democratic state lawmakers – 20 in the Illinois House of Representatives and 13 in the Senate – introduced a bill today in a renewed effort to strike a compromise with Chicago Mayor Lori Lightfoot and advocates working to address the budget deficit while also creating major dedicated funding to address homelessness in Chicago.

The legislation, SB 3243/HB 4826, preserves all of the money that Lightfoot is seeking to trim the city’s budget deficit while generating a projected $79 million to curb homelessness, which now afflicts more than 86,000 Chicagoans. The legislation would modify Lightfoot’s quest to increase the Chicago’s Real Estate Transfer Tax (RETT), adjusting proposed rates assessed on the properties sold for more than $3 million, while extending a tax cut to 96 percent of average annual property sales in the city.

The bill largely parallels a concept championed by a group of Illinois Senators during last fall’s veto session, when Lightfoot’s bid for General Assembly approval of the tax increase faltered due, in part, to the qualms of legislators who want the measure to fund affordable and supportive housing for people experiencing homelessness in concert with reducing the budget gap.

Lightfoot, herself, embraced a proposed RETT increase to unleash new funding to combat homelessness while campaigning for Mayor.  This is one reason state legislators believe a compromise could be possible with her administration.

“We can't emphasize enough that this legislation will produce a win-win outcome that would significantly reduce homelessness in our city and help address the city's budget deficit,” said State Senator Ram Villivalam (D-8th). “Along with several of my colleagues and the Bring Chicago Home coalition, I look forward to collaborating with both the Mayor and the Governor to get this done.”

For all other sales tiers, the rates would remain identical to Lightfoot’s proposal, ensuring a tax cut for properties purchased for less than $1 million – equivalent to 96 percent of the city’s average annual real estate transactions.

Conversations between legislators, advocates, and the mayor’s office are ongoing, but no agreement has been reached.  State legislators hope the introduction of the bill will be an impetus to bring the two sides closer together.

“If passed, this bill will create resources for affordable housing that will help shrink the shortage of 120,000 affordable units in the City of Chicago and have a significant impact on reducing homelessness,” said State Representative Delia Ramirez (D-4th), the lead sponsor of the bill in the House. “At the same time it will give a tax cut to 96% of property transactions in the city and preserve the mayor’s progressive tax structure. Now is the time to come together to get this done.”

While aid to the homeless has increased marginally during the Lightfoot administration, it still ranks near the bottom among the 10 U.S. cities with the largest homeless populations, accounting for only .08% percent of what New York City allocates to the problem and 6% percent of what Los Angeles spends.

Meanwhile, homelessness in Chicago continues unchecked, affecting nearly 14,000 people who are currently working, more than 18,000 who have some college education, and more than 20,000 children, many of them struggling to stay in school, according to a 2019 analysis compiled by the Chicago Coalition for the Homeless. 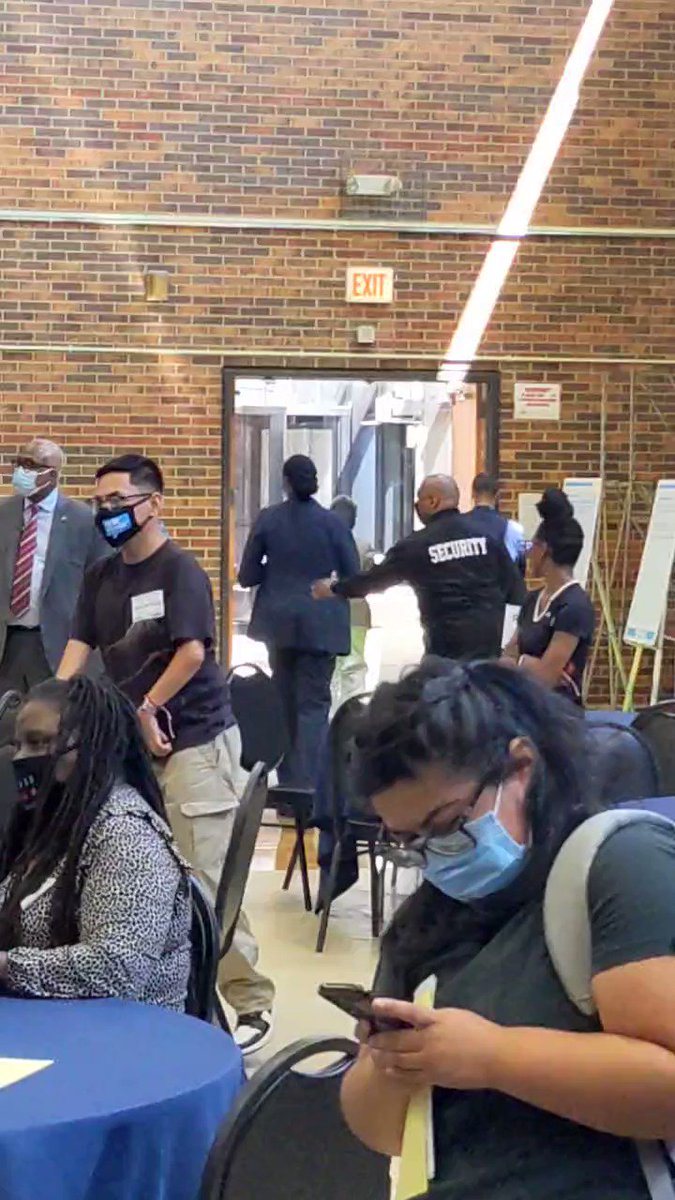 ✨Shelbz✨@shelb_a_delb
Lightfoot walking out instead of listening to us. It's time to end homelessness and #BringChicagoHome !!! https://t.co/4WgkULZK9I
22
68

Bring Chicago Home · 1 week ago
@BringChiHome
SO MUCH SUPPORT THIS MORNING! 🥰 @chicagosmayor, are you listening? https://t.co/f9uMQjn6XB
View on Twitter 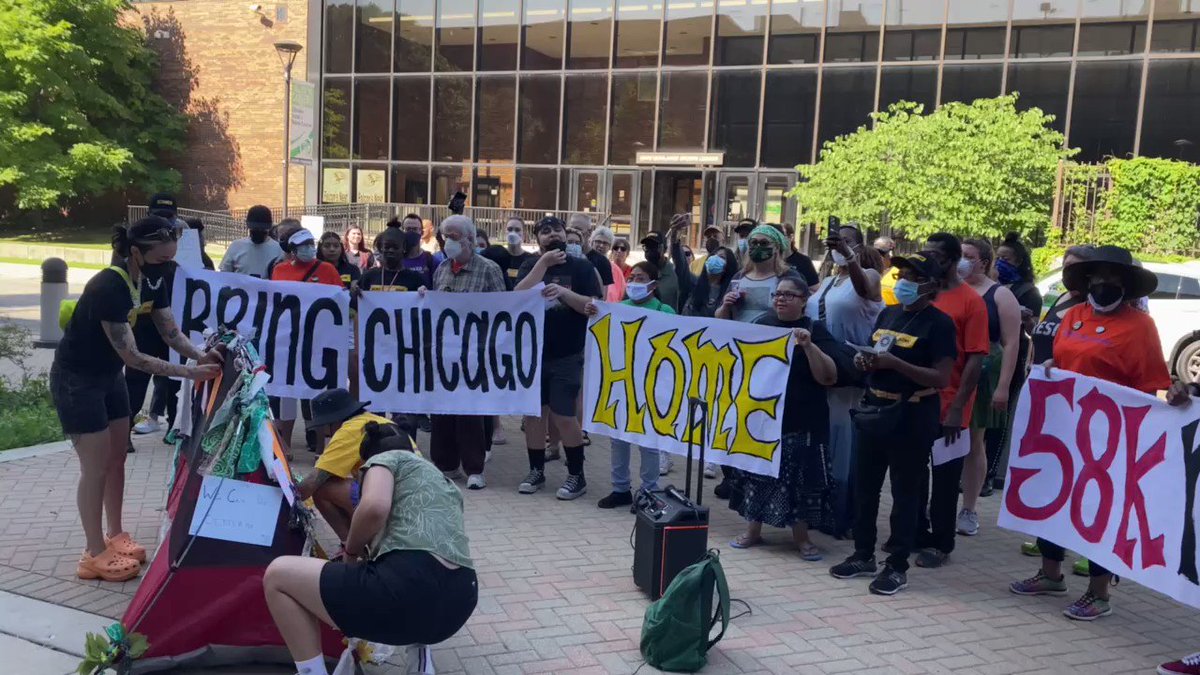 Bring Chicago Home · 2 weeks ago
@BringChiHome
Ald. @CDRosa: “This is exactly why we need to pass #BringChicagoHome. Look at what we’ve been able to do with this increase in funding. Imagine what we’d be able to accomplish if we had that money year after year.” https://t.co/69fvJMxY5r
View on Twitter
10
22

Bring Chicago Home · 2 weeks ago
@BringChiHome
Ending homelessness is not a high priority for @AldermanErvin, but it sure is a priority for his constituents! https://t.co/ZKDi70nO9H
View on Twitter
0
5

Bring Chicago Home · 3 weeks ago
@BringChiHome
“Sometimes you can fix things things with a bottle of water or a granola bar. Sometimes you can’t and need to fix a broken system.”

Bring Chicago Home · 3 weeks ago
@BringChiHome
Today 60+ Community members from across the #WestSideChicago joined us in #Ward28 to call on #AldermanErvin - Join #BringChicagoHome, fight against the #CycleOfViolence by making #HousingAHumanRight with us. You want Violence Prevention? You'll need Homelessness Prevention.
View on Twitter
1
3

Shoutout to everyone that came out today to #BringChicagoHome!

Ald. Carlos Ramirez-Rosa: “This is exactly why we need to pass #BringChicagoHome. Look at what we’ve been...

A homeless encampment was a fixture of Fireman's Park for years, even as the city tried to clear the area....
View on Facebook

Around 50 to 60 members of the Bring Chicago Home coalition marched to the office of Ald. Jason Ervin (28th),...
View on Facebook

Thank you to all who joined us to support the Interfaith Roundtable present their letter of support to Mayor Lori...

Thank you to all who joined us to support the Interfaith Roundtable present their letter of support to Mayor Lori Lightfoot. 80 faith congregation leaders agreed, the time to Bring Chicago Home with the Real Estate Transfer Tax is Now. Push this work forward by reaching out to your alderperson and voicing your support via our website #housingisahumanright #BringChicagoHome #video #event #takeaction

The Interfaith Roundtable on Homelessness will call on Mayor Lori Lightfoot to use her power to address #homelessness in #Chicago! Next Monday, join us as we deliver a letter to the #mayor signed by dozens of faith leaders from across the city in support of Bring Chicago Home. Hear from speakers from various faiths on the importance of creating housing for people experiencing homelessness. We invite #press and the #media to report on this #crisis. #BringChicagoHome #faithleaders #endhomelessness #socialgood #instagood Monday, May 23rd, at 9 am outside City Hall on Randolph between Clark and LaSalle. #showup #housingisahumanright RSVP at bit.ly/bringchihome

How to define and measure #homelessness in the U.S. is still unsettled. Living #doubledup is homelessness too; learn more about this "hidden" form. #housingisahumanright #livingarrangements #housinginsecurity #affordability #demographics #research

"We haven't seen a huge influx in people who are experiencing #homelessness yet,” Carlson said. “But it's probably on the horizon, as all of these resources are ending.” Together we can create a solution. #housingisahumanright #endhomelessness #community #people #families #youth #bringchicagohome #chicago

The CTA has hired four private security firms to try to double the number of unarmed guards patrolling the system 24/7. But even guards say they're ill-equipped to deal with violent or unruly passengers. https://bit.ly/3kyzUEc #RTA #criminalization #homeless #Chicago

The #Chicago Resilient Communities Pilot is now accepting applications! The program will provide 5,000 households with $500 in cash assistance per month for 12 months. Apply TODAY at https://bit.ly/3vNtyps or call 855-594-4016. #communities #support #pandemic #people

We lost a beautifully amazing person, Edrika Fulford. She was a champion for many and brought inspiration everywhere. We will miss her immensely. Please join us tomorrow to celebrate Edrika's life and continue her legacy at St. Sabina Church 1210 W 78th Pl, Chicago 60620 from 11 a.m to 1 p.m. https://bit.ly/3vCIhDw #grassrootsleader 💛 🧡 #gonetosoon #willneverbeforgotten